SAY IT LOUD! Say it loud or shut the hell up!

Kate's place has a post today titled "I Won."  It refers to this article in Foreign Policy regarding the Senate investigation into the attack at Benghazi and the death of the US Ambassador and three US servicemen. Predictably, the Obama administration is screwing around, won't let certain papers be viewed except this week, and only by Senators.


One senior GOP Senate staffer told The Cable that State is only making the documents available for senators and committee staff to view today and tomorrow, which won't actually allow the members to prepare for the hearing. Staffers for committee members are also not allowed to see the material.
"Funny since no member is in town," the aide said. "The timing and limited access clearly demonstrates the administration cares more about playing politics with the tragedy than accepting responsibility."

My comment over at Kate's , re-posted for your convenience.

"The timing and limited access clearly demonstrates the administration cares more about playing politics with the tragedy than accepting responsibility." 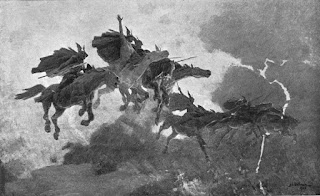 Incidentally its not a tragedy. Those brave men died in battle like GIANTS. Chosen by the Valkyrie. Two of them accounted for 60 enemy fighters. They died not because their kung fu fell short, but because they were BETRAYED by their own side. Tragedies are when shit happens to innocent people by accident.

In other news, that guy who made that video this all was blamed on got a year in jail yesterday. For "unrelated charges" of course.


Make a fuss Republicans. Make a ruckus. Kick over the traces and stonewall Barry like there's no tomorrow. Or shut up and just let it burn.


But don't cluck like a bunch of hens. That's so degrading.

Sort of like the Cubans at the Bay of Pigs. 10:1 kill ratios for the exiles on that beach, but JFK betrayed them and did not approve ammo resupply.

What was that JFK said about paying any price, helping any friend for freedom?