They already stuck a tap in Big Tobacco and Big Oil, two of the Big Three Autos have been nationalized (and will henceforth be a net cost, not a source of revenue), Big Finance is nationalized and causing a huge meltdown already, Big Healthcare is on the razor's edge of being taken over.  What large industries does that leave?

Big Food.  They're the only really large source of money left un-raped.

So, here's the plan for Big Food.  We have the Coke Tax, and the Big Mac/Whopper Tax.  Both of these proposals assert that there is an "uncontrolled obesity epidemic", that this epidemic costs on the order of $150 billion annually, and that a tax on pop and/or fatty foods will change eating habits and reduce the number of fat people, while creating "new" revenue for healthcare.

So its another crack at Prohibition, basically.  The War on Drugs, the War on Poverty, the War on Guns, the War on Smoking and the War on Crime were all SO successful the Dems are going to have a War on Fat.  Awesome.

The end result is a government official telling you what to eat, what to drink, what and where to smoke (but don't quit, how are we going to collect tobacco tax if you quit?), what doctor you're going to see, what your doctor will be allowed to do for you (if anything), what to drive and how much (pay per mile road tax with GPS, baby), and what you're going to make on your investments (if anything).

Because according to the Democrat Party platform, you're stupid.  You're so stupid you have to be taxed, regulated and poked with a cattle prod into doing what's in your own basic self interest.  Otherwise you'll friggin' die like turkeys, from standing in the rain, looking at the sky with your mouth open.

After they get done taxing food, I don't know where the hell they're going to look next.  Clothing?  Chairman Mao jackets and blue PJ pants for all?  Well, y'all ARE stupid, maybe Big Brother should choose your wardrobe for you as well as your pantry, garage and keep you from running with the scissors.  High heel tax, ladies?

The Over Taxed Turkey Phantom

In an interesting cross between genetics, biology and computer science, some clever lads attack The Hamiltonian Path Problem using bacteria.  From the abstract:

We programmed bacteria with a genetic circuit that enables them to evaluate all possible paths in a directed graph in order to find a Hamiltonian path. We encoded a three node directed graph as DNA segments that were autonomously shuffled randomly inside bacteria by a Hin/hixC recombination system we previously adapted from Salmonella typhimurium for use in Escherichia coli.

NP-Complete problems are an entire range of important, practical problems in life that normal (read serial) computers suck at.  Things like laminar flow, network optimization, scheduling etc.  This approach is quite novel, so it will be fun to see how they make out.  Imagine, solving the traveling salesman problem in a petri dish.

Posted by The Phantom at 1:21 PM No comments:

Wherever Albert Gore (aka Algore, thank you Rush Limbaugh) goes, it either snows or tries to really, really hard.  Including his home town.

NASHVILLE, Tenn. (AP) — Cool weather has broken a previous low temperature for July 21 in Nashville that was set when Rutherford B. Hayes was president.

When the temperature at the National Weather Service station dipped to 58 degrees at 5:30 a.m. on Tuesday, it wiped out the previous record low for the date of 60 degrees, which was set in 1877.

NWS forecaster Bobby Boyd noted it was the third consecutive morning when Nashville either tied or broke a daily low temperature record.

The Nashville city council better arrange for Algore to leave before a glacier forms over his house.

That must really be something, to be so great an ass that the very weather mocks you.  Wadda maroon!


The Phantom
Posted by The Phantom at 1:05 PM No comments:

In case you were wondering why banks are in trouble...

No, really.  I couldn't make this up.  The author says,

Still trying to comprehend this legal lunacy, I called the Florida Bar, which put me in touch with Florida mortgage foreclosure lawyers. One of them, Tampa attorney Kristofer Fernandez, said he's seen several cases where a large bank has sued itself for foreclosure as the holder of both first and second mortgages.

"Four or five years ago, you would have never seen this," Fernandez said. "Now, it's very common."

My question is, at what point does a judge have the lawyers taken out to the parking lot and flogged?

Posted by The Phantom at 9:41 PM No comments:

Why I think government is dangerously stupid.

When I post things, a common theme is the dangerous stupidity of government and the pureblind, willful, aggressive ignorance of those who support more government as a solution any and all problems.

Here's why, in a nutshell.

About 10 officers attended the Pine Ridge Tobacco smoke shack on the east side of Highway 6, south of Caledonia. Owner Steve "Boots" Powless issued a text alert upon their arrival. Within 15 minutes, the officers were surrounded by nearly 20 of Powless's supporters.

"They decided it was not in the public interest to pursue the matter at this time," Const. Paula Wright of the Haldimand OPP said yesterday. "Anyone found to have been acting unlawfully will be held accountable."

Ok so far? 10 cops detailed off to remove an illegal smoke shack parked illegally on a guy's front lawn got confronted by 20 pukes looking for a fight, and they wussed out, or more likely were ordered to wuss out. Said pukes just happened to be Indians. Just for comparison, any time that Gary McHale guy so much as breaks wind 200 cops show up in riot gear. On we go.

Pine Ridge Tobacco is unique because it is the first to arise on private property on the east side of Highway 6 without the consent of the landowner, retired farmer Ernie Palmer.

About a month ago, Powless told Palmer he was setting up shop.

Yeah, about a month ago Bootsy Powless dropped this half-assed trailer thing at the end of ol' Ernie's driveway. Like, on the front lawn ok?
Here's a picture of it: 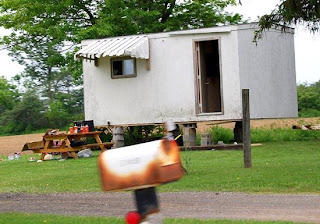 Ernie told him to move along and Bootsy pretty much said "make me, white man."
Ernie's an old guy, short of shooting friend Bootsy in the ass with a load of rock salt there's not too much he can do, right? He's told Bootsy to piss off, he's called the cops, and that's the extent of what his power is. Which by itself is already friggin' pitiful, but it gets better.

On Friday [July 3rd], Haldimand County's bylaw department served Palmer with a summons to appear in provincial offences court July 31. He has been charged with allowing an illegal commercial business in an agricultural zone.

Isn't that great? ERNIE gets charged. Not Steven "Bootsy Baby" Powless, not the f-ing OPP sergeant or captain or whatever imbecile it was that told his men to back down to a few stupid thugs, not even one of the thugs. Ernie Palmer, the victim here, gets charged. And he will no doubt duly show up at the appointed time and be scolded by whatever crack-smoking moron thought it was a good idea to charge him.

Now that is as perfect an example of stupidity in governance as I have ever seen in all my life. We've got a bunch of thugs taking advantage of damn fool federal laws, being encouraged by bald cowardice from provincial politicians, and finally local county officials taking their temper out on the innocent land owner.

Were it mine to decide, I'd clap the lot of them in jail for abuse of power and/or dereliction of duty and give Ernie some money for his trouble. Maybe the combined salary of all the stupid sonsabitches involved in this farce for however long it takes them to get Bootsy boy off Ernie's front lawn. That'd be fair, eh?

What once was science fiction is being field-tested by the University of Iowa to iron out the wrinkles should a by-the-mile road tax ever be enacted.

Besides the technological advances making such a tax possible, the idea is getting a hard push from a growing number of transportation experts and officials. That is because the traditional by-the-gallon fuel tax, struggling to keep up with road building and maintenance demands, could fall even farther behind as vehicles' gas mileage rises and more alternative-fuel vehicles come on line. [ed. Can you say unintended greenie consequence?  Sure you can! ]


The idea of shifting to a by-the-mile tax has been discussed for years, but it now appears to be getting more serious attention. A federal commission, after a two-year study, concluded earlier this year that the road tax was the "best path forward" to keep revenues flowing to highway and transportation projects, and could be an important new tool to help manage traffic and relieve congestion.

Yeah.  One wrinkle, to do it they have to know everywhere you went.  Everywhere.  It will be recorded.  All of it.  Every day.
What's that?  You have nothing to hide, you say?  What about that side trip to the donut shop every morning?  Donuts are bad for you' y'know. Big Brother's going to be paying your medical coverage, he's going to ding you for everything you do that's bad.

The answer?  HACK IT!  Obviously!  Probably the thing won't even be in full deployment before the first bulletproof hacks show up on the web.  By the end of the first year there won't be one of these black boxes that doesn't have a hair pin sticking out of it to jimmy the tax man. Your tax dollars being flushed down the dumper of life, my friends.

Welcome to the 21st Century Big Brother!  People can fight back now, you jerk.