Saw this article at Small Dead Animals and felt compelled to comment.


While much has been made of the "working class" and its alienation from "the elite," this phrasing comes with associations about material wealth and economic class that aren't necessarily helpful. Many of those who support "populist" politics in opposition to the elite tend to be relatively solidly middle class, while many a starving artist supports the establishment Left. The character of one's work and lifestyle seems to shape the common values of each side of the class divide more than income does.

Consider instead two main classes of people in society, who tend to navigate and interact with the world in fundamentally different ways. The first are those people who work primarily in the real, physical world. Maybe they work directly with their hands, like a carpenter, or a mechanic, or a farmer. Or maybe they are only a step away: they own or manage a business where they organize and direct employees who work with their hands and buy or sell or move things around in the real world, like a transport logistics company. This class necessarily works in a physical location or owns or operates physical assets central to its trade.

The second class of people is different. They are, relatively speaking, a civilizational innovation. They don't interact much with the physical world directly; they are handlers of knowledge.

For simplicity's sake, let's call these two classes the Physicals and the Virtuals, respectively. This division maps closely onto another much-discussed political wedge: the geographic split between cities, where most of the Virtuals are concentrated, and the outlying exurbs and rural hinterlands, where the Physicals remain predominant. No coincidence that partisan differences between urban metropolitan cores and provinces have become one of the defining features of politics across the Western democratic world.

This makes a certain amount of sense when driving past it at 30mph. The age-old divide between the landed class and those who work the land, reframed as knowledge-wranglers vs. knuckle-busters. Latte sippers vs. trucker, with the latte set sitting firmly in the political driver's seat.

For the Virtual elite, the most unforgivable thing about the Physicals and their grimy world is that they stubbornly refuse to yield to full, frictionless control. Virtuals are increasingly most comfortable in a purely virtual environment—one where they can have direct, instantaneous control over (virtual) matter. Real matter is stubbornly resistant, a reminder that the self doesn't control the universe, and that they are vulnerable, even mortal.

I agree with this framework to a certain extent. It does go a long way to explaining the reactions of the political elite to the Freedom Convoy, and makes understandable the larger cultural push for things like self-driving cars, robotic factories, all the way down to network-connected light bulbs.  Knowledge workers trying to eliminate human error (and super expensive human labor) from their logistics loops.

Which is great, in theory. In reality the most successful and most well-developed self driving car is absolutely unsafe to let loose without a human driver. Even on a closed course where all conditions are controlled, they still aren't reliable. Snow, just for example, completely screws them up. The cutting edge of the knowledge revolution, those elite nerds who design and build the prototypes, acknowledge that a self-driving car is a much more difficult problem than was thought 30 years ago when all this started.

This is why, in the fabulously science fiction year of 2022, when World Peace was supposed to have been achieved and World Hunger should have been a thing of the past, you don't have your own flying car in the driveway. All those futures with free electricity and flying cars were written in the 1930s and '40s. Back then, it seemed there was nothing that couldn't be accomplished by engineers and industry. In 1946, nuclear fusion was only 20 years away! Remember that?

Flying cars and nuclear fusion have been "20 years away" for nearly 80 years. It turns out that some problems are a lot harder than people think. Flying cars is one that I looked into myself, it all boils down to the engineering requirements of a road vehicle being incompatible with a flying vehicle, and movement in three dimensions being fundamentally different than in only two. Takeoff is optional, landing is mandatory. Making the construction and control of a road-capable aircraft ludicrously difficult. It really requires higher energy concentrations than we can generate with current engine technology. Hybrids with internal combustion generators and electric flight motors come closest to doing it, but even with the best in computer flight controls it isn't safe to fly around in. Like the jet-pack, it is a demonstration-only technology.

Because of this "reality vs. the dream" problem, there are not going to be self-driving cars, trucks, trains and buses anytime soon. The engineering issues of having automated vehicles driving around environments with people in them are not resolvable using current information-processing technology. Humans manage it because A) all these environments are designed by and for humans, and B) Humans operate in the physical environment of Nature thanks to four billion years of evolution. We're the best bio/mechanical system on planet Earth. Digital computers as currently constituted are never going to approach Human performance in the physical world.

The guys in charge of stuff like Amazon, WalMart, Google, General Motors, Bank of Canada etc. really, really want to get rid of those deplorables from their supply chains. They're willing to kill people to get it done. They'd be more than happy to send -existing- self-driving technology out into the world, stitched into existing 18-wheelers, and simply accept the resulting carnage as the cost of doing business. They don't care if it results in better command and control success for them.

Exhibit A, the truckers. The truckers are the guys impacted by  control policies imposed by a central authority that has no idea what the result of their policy will be. Worse than that, they really don't care. The creation and roll-out of the policy was their whole interest in the matter, what happens as a result is not their problem.

The trucker's have been the victims of an awful lot of similar policies levied on them by all levels of government and their own industry as well. One small example is the time spent by truckers waiting in line at ports. The real-world result of the combination of regulations and policies acting on physical reality is that a guy who gets paid by the load is stuck waiting six to eight hours to pick up a container at the port. He's not getting paid for that. None of that was deliberate. It all grows out of bad decisions by centralized authority that is decoupled from the results of their orders.

One more idiotic policy did not seem like a big deal to force down the trucker's throats. The suits back in Ottawa didn't think twice, they mandated Covid-19 vaxx to anybody crossing the border. No jab, no job, rednecks. Shut up and get your shot.

So two things happened. First, the already strained supply chain started breaking down even further because the trucking industry lost 10% of their driving workforce at the stroke of a pen. Second, the pissed-off truckers all talk to each other. They decided that they couldn't accept another slap-in-the-face and survive. When you clear $3000 a month after expenses and taxes, and the lease on your truck is $3000, there's not much left for you. The math, as they say, didn't work out.

What's left to do? Go after the stupid pricks making the policies that are killing your business. Put -their- skin in the game for a change. Freedom Convoy made the Ottawa Elite weenies walk their talk, and they did not like it. Central control freaks never like it when the consequences of their actions come back to them.
Posted by The Phantom at 5:44 PM 1 comment:

As of right now, the Trudeau Liberals have invoked the Emergencies Act. Formerly known as the War Measures Act, it gives the federal government and RCMP the effective power to do pretty much anything they want.

All because of guys parking their trucks and blowing their horns in Ottawa.

I guess we'll see what comes next, eh?

GiveSendGo defies Ontario. And the cops are "visiting" on-line supporters of the Freedom Convoy.

The Provincial Court of Ontario issued orders to suspend payment of donated money for the Freedom Convoy.

GiveSendGo told them to step off.

Know this! Canada has absolutely ZERO jurisdiction over how we manage our funds here at GiveSendGo. All funds for EVERY campaign on GiveSendGo flow directly to the recipients of those campaigns, not least of which is The Freedom Convoy campaign.

Pretty different response than GoFundMe, who rolled over for the Ottawa police after a phone call.
The OPP pays a visit to a Freedom Convoy on-line supporter.

And didn't they just send the cutest little girl in uniform they could scrounge up for this shakedown? How amazingly unthreatening was that? So nice!

All of the above is so amazingly stupid I still can't believe the Ontario government is doing it. Sending the cops to people's houses because they liked a post of Farcebook? Suspending funding for a -legal- protest that is bending over backwards to do everything violence-free and by the book? Threatening to take people's kids away because they are attending a LEGAL demonstration? After giving Antifa and the Mohawk Warriors a free pass in this province to burn shit and beat people up since 2006?

Are you kidding me? Randomly driving around the last two weeks I've seen a lot of Normies out there with Canadian flags hanging off the backs of their pickup trucks. Lawn signs supporting the convoy. Tractors dressed up with flags and signs sitting in front of the Tim Horton's on Highway 3 in the Middle of Nowhere Ontario. This is not some little Antifa rent-a-mob bussed in to break windows. They finally pissed off the Normies. All those people who don't pay attention to the news and don't care about anything but home and job, they're PISSED. And they are letting the government know that they're pissed. That's what this is.

But, on the other hand, there are sneaky reports that Big Doug is going to shit-can the vax passports this weekend. Maybe he can see lightning and hear thunder after all. We'll see.
Posted by The Phantom at 1:14 PM 2 comments:

Summation of the Freedom Convoy in one cartoon.

This one cartoon pretty much says it all for me. 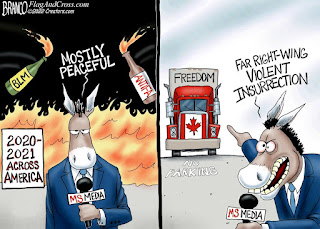 Let's have a couple of pictures of the action from these events, shall we?