Did you think they would stop with Dr. Seuss?

No, not really. I figured they'd test the waters with Dr. Seuss and then put the pedal to the metal.

And they did. The new racist emergency is The Adventures of Ook and Gluck. No, I'm not making this up.

On Monday, March 22, 2021, with the full support of Dav Pilkey, Scholastic halted distribution of the 2010 book The Adventures of Ook and Gluk. Together, we recognize that this book perpetuates passive racism. We are deeply sorry for this serious mistake. Scholastic has removed the book from our websites, stopped fulfillment of any orders (domestically or abroad), contacted our retail partners to explain why this book is no longer available, and sought a return of all inventory.

Dav Pilkey is the author of Captain Underpants. His caveman book has been circulating for 12 years without any concern. I'll add that 2010 was a year I remember pretty well, and I don't recall it being super racist. More the reverse, people walking on eggshells to avoid offending anyone. So, not having read anything but the blurb, I expect anyone who read it would be wondering what the "passive racism" was. Nobody is saying anything, which is usual for this type of thing.
Then there's this:

Throughout our 100 year history, we have learned that trust must be won every day by total vigilance.

(Emphasis mine, obviously.) That reads like the type of overblown rhetoric one expects from Pravda circa 1955. "Total vigilance!!!!" forsooth. Reading the reviews at Amazon, all the one and two stars are Karen complaining about the caveman spelling. There are -zero- complaints that the book shows racism that I saw, but I did not read all 2128 of the four-and-a-half-out-of-five star ratings.
Another SJW shirtstorm, basically. Really ramping up the cancellation machine, my friends.
Posted by The Phantom at 11:17 AM No comments:

When he finally pees his pants on TV...

Apparently the official Whitehouse website says this is the Biden-Harris Administration.

The White House is reportedly urging staffers in all federal agencies refer to the current administration as "the Biden-Harris Administration," a leaked email from a federal employee reveals.

Indeed, on the White House website, the administration is referred to as "The Biden-Harris Administration."

That's because Mr. Sniffer can't find the bathroom on his own.
It'll be the Harris-Biden Administration when the Depends give up during a speech. Or when he falls all the way down the fucking stairs of Airforce One. I'd be more disgusted at them for the obvious elder abuse if he wasn't the guy that he is.
"#BelieveAllWomen... except the ones groped by the Sniffer. Don't listen to those bitches, they're lying!"
Sure thing, mass media. Yep, we totally believe ya. Uh huh. That's right for sure.
Posted by The Phantom at 9:22 AM 2 comments: 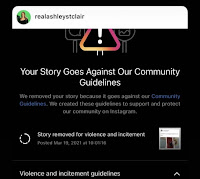 ...that Biden wiped out on the stairs of Airforce One on Friday. Yep. The old man nearly ate it on Friday. Three times! Down on his hands and knees on the stairs, nearly face-planted. Then he nearly fell again getting in the door of the airplane. 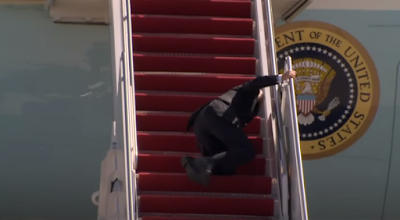 And you did not hear about it at all. Nobody said shit on the news. Instagram banned people from posting the video.

Ask yourself, when was the last time the President stumbling wasn't front-page news? I'll tell you. Since Gerald Ford was president.

I love it when they lie like this. It's so stupidly obvious, they're punching themselves in the face.

Dr. Seuss books to be removed from eBay.

Moving ahead with the effort to make literally everything in life problematic, the screeching about Dr. Seuss books has led eBay to scrub them from it's service.

Online marketplace eBay Inc. EBAY -2.31% said it is working to prevent the resale of six Dr. Seuss books that were pulled earlier this week by the company in charge of the late author’s works because they contain offensive imagery.

“EBay is currently sweeping our marketplace to remove these items,” a spokeswoman for the company said in an email. New copies of the six books were no longer for sale online at major retailers such as Barnes & Noble on Thursday afternoon, which put eBay among the most prominent platforms for the books to be sold.

Hundreds of listings for the six books could be found on the platform as of Thursday morning, though the number appeared to be lower than it was on Wednesday evening. The eBay spokeswoman said that it would take some time to review seller listings and that the company was monitoring newly published listings.

Just to reiterate: you can buy Mein Kampf on eBay. But not On Beyond Zebra.

Update! Here's a guy who did a ton of work running this thing down to its origins. So, where did this "Dr. Seuss is RAAAACIST!!!" thing come from?

39-year-old Katie Ishizuka-Stephens and 36-year-old Ramon Stephens are race-obsessed college critters. Programmed by the far-left schools and universities they never escaped from, they see everything through a skin-color lens. Indeed, I would be remiss in not mentioning that Katie is half-white and half-Japanese, while Ramon is black. These details matter greatly to the pair, who likely chose each other genetically rather than by any other metric.

He goes into their claims in detail. He's pretty harsh. But here in 2021, there's not much point in holding back for people who make shit up to score political points by destroying the reputations of the dead. That's what we're talking about here.

Of note is that, according to author Rob Larrikin, both Ishizuka and Stephens have scrubbed their social media of pictures etc. It seems that many people didn't like that they lied about Dr. Seuss like that.

Further to the banning of conservative people and organizations on Twitter, Youtube, Farcebook etc. and further to the shuttering of Baen's Bar in the face of a de-platforming attack by the Left, a new government report has come out saying that:

talking shit on the internet does not increase hate crimes. Like we needed a freakin' official report to know that.

And they hid the report.

Freedom of speech on the internet did not lead to a rise in “hate crimes,” according to a report sent from the U.S. Department of Commerce to Congress in January — a report that has yet to appear on any government website.

Breitbart News has obtained a copy of the report, which is published in full below. But sources close to the government say they are baffled as to why it wasn’t released publicly after being sent to Congress.

The report was prepared by the Department of Commerce’s National Telecommunications and Information Administration (NTIA), which is responsible for advising the President on all matters related to telecommunication and the internet.

It was drafted to revise the findings of a previous report from NTIA in 1993 titled The Role of Telecommunications in Hate Crimes. Although it was prepared under the Trump administration, the request to revise the report came from the 116th Congress, which was controlled by a 35-seat Democrat majority in the House and only a slim Republican majority in the Senate.

The 1993 report is still publicly available on the web. But the latest revision to its findings is not.

Sources who were close to the drafting and approval process suspect that bureaucrats and establishment politicians with a vested interest in the “hate crimes” panic are trying to suppress it, because its conclusions challenge popular media narratives alleging a rise in internet-inspired hate crimes.

There is an awful lot of government effort going into making people shut up these days. The nice thing about this is it is so easy to thwart. All you have to do is talk. Be loud, be proud my friends.

And to all you little weasels with your deplatforming campaigns, your virtue signalling and your "if it only saves one life!" bullshit, you're liars. And we know that you know it.

So all you liars whining about Dr. Seuss and JK Rowling and Baens Bar, just know that we can see you lying.