While we are on the subject of unreasonable gubmint power... you got a receipt for that song, boy?

Did you know they can seize any/all laptops, cell phones, ipods, cameras and etc. etc. etc. at the US border and keep them as long as they want?  As in forever?  And they can analyze the contents thereof  to see if you've committed a heinous crime, like downloading songs?  Or skipping out on parking fines!

Yep.  They can.  9th Circus Court of A Peel says so.  Mind the slippery slope there, they just greased it for you.

On Thursday, Homeland Security Secretary Janet Napolitano announced new guidelines for searching and seizing electronic devices at the border. In a press release, DHS said the guidelines will "enhance and clarify oversight for searches of computers and other electronic media at U.S. ports of entry."

Rhetoric aside, in reality, not much has changed. Laptops and electronic gear can still be seized and held indefinitely; there's no requirement that they be returned to their owners after even six months or a year has passed, though supervisory approval is required if they're held for more than 15 days. The complete contents of a hard drive or memory card can be perused at length for evidence of lawbreaking of any kind, even if it's underpaying your taxes or not paying parking tickets.

This kind of open-ended scanning should worry anyone who travels internationally, not just privacy advocates. When we have laws like the No Electronic Theft Act, which makes sharing a sufficient number of MP3 files a federal crime, how many college students are unindicted felons? File this under the show-me-the-man-and-I'll-show-you-the-crime department.

So friends, if you are crossing the border, EVEN IF YOU ARE AN AMERICAN CITIZEN, may I suggest you make bloody good and sure you do it with a blank hard drive in your computer, blank SD chips in your phone and a blank pen drive.  I mean, can you absolutely prove every single song and ring-tone on your phone/ipod/whatever was legally purchased?   How about that copy of Windows XP, is it bootleg?

You got receipts?  On ya?

Didn't think so.  Uncle Phantom says wipe it or leave it at home, kids.  Mail an ENCRYPTED stick to yourself, just to be on the safe side. They can't open your mail without a warrant.

Posted by The Phantom at 3:05 PM No comments:

Democrats move on the Internet.

We are soooo not paranoid enough, my friends.

Internet companies and civil liberties groups were alarmed this spring when a U.S. Senate bill proposed handing the White House the power to disconnect private-sector computers from the Internet.

They're not much happier about a revised version that aides to Sen. Jay Rockefeller, a West Virginia Democrat, have spent months drafting behind closed doors. CNET News has obtained a copy of the 55-page draft of S.773 (excerpt), which still appears to permit the president to seize temporary control of private-sector networks during a so-called cybersecurity emergency.

This is a bill that grants the President of the USA control over non-government networks in the USA, guys. Meaning your PC and your internet connection, got it?

The new version would allow the president to "declare a cybersecurity emergency" relating to "non-governmental" computer networks and do what's necessary to respond to the threat. Other sections of the proposal include a federal certification program for "cybersecurity professionals," and a requirement that certain computer systems and networks in the private sector be managed by people who have been awarded that license.

Licensing of network guys, just like doctors. It gets better:

Probably the most controversial language begins in Section 201, which permits the president to "direct the national response to the cyber threat" if necessary for "the national defense and security." The White House is supposed to engage in "periodic mapping" of private networks deemed to be critical, and those companies "shall share" requested information with the federal government. ("Cyber" is defined as anything having to do with the Internet, telecommunications, computers, or computer networks.)

"The language has changed but it doesn't contain any real additional limits," EFF's Tien says. "It simply switches the more direct and obvious language they had originally to the more ambiguous (version)...The designation of what is a critical infrastructure system or network as far as I can tell has no specific process. There's no provision for any administrative process or review. That's where the problems seem to start. And then you have the amorphous powers that go along with it."

Translation: If your company is deemed "critical," a new set of regulations kick in involving who you can hire, what information you must disclose, and when the government would exercise control over your computers or network.

Bottom line here, if they pass this Barry Obama can personally shut off the Internet and all communications networks to do with telephones, faxes, cell phones, and so forth, whenever he sees fit and for as long as he likes. Like, during an election. Or if somebody shows up with a stained blue dress(TM), or if he f-ing well feels like it because things aren't going his way on some legislation.

One more thing to call your congressman and raise Hell about. My condolences mi amigo Americanos, it sucks to be you this year.

Speaking of art, the search for the next Leni Riefenstahl begins!

Sharpen up your resumes and portfolios kids, because the NEA is looking for a few good artists!


Backed by the full weight of President Barack Obama's call to service and the institutional weight of the NEA, the conference call was billed as an opportunity for those in the art community to inspire service in four key categories, and at the top of the list were "health care" and "energy and environment." The service was to be attached to the President's United We Serve campaign, a nationwide federal initiative to make service a way of life for all Americans.

It sounded, how should I phrase it…unusual, that the NEA would invite the art community to a meeting to discuss issues currently under vehement national debate. I decided to call in, and what I heard concerned me.

Every day I wonder if I'm paranoid enough about this guy, and every day the answer comes back: nope.

Posted by The Phantom at 5:56 PM No comments:

Though some may be uncomfortable with government oversight of any aspect of journalism, the F.T.C. seems to be "attempting to play a facilitating and public educational role in gathering together various disciplines and perspectives to talk about the crisis in mainstream journalism," said Neil Henry, a professor and dean at the graduate school of journalism at the University of California, Berkeley. "The government's willingness to raise the profile of this issue, and to help explain why it is important for a national conversation, I think in general is welcome."

In other words, "Hurry the hell up and give us some money Barry!  Who do you think is going to save your bacon in 2010 if not us?"

My response: gee, how surprising.

Posted by The Phantom at 5:46 PM No comments: 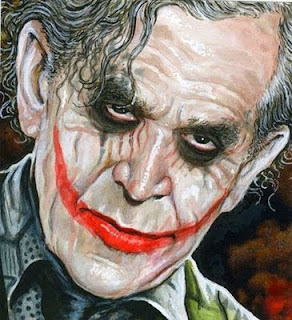 This here is a hateful racist statement made by a bad person who hates everyone and everything and drowns kittens. 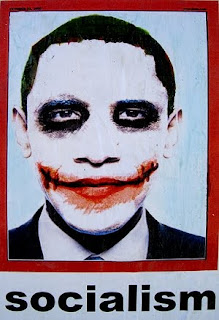 Ok, everybody got that?

As a small "c" conservative type, I have some fundamental beliefs about life and society that appear to clash with the prevailing trend in modern governance.  One of my strongest beliefs is that civilized society exists to serve the people in it.  We do not exist to serve society.

One of the places this manifests itself most visibly is when disaster strikes.  If there is a flood for example, the properly brought up young individual will busy him/herself securing the safety of those around him, including the young, the old and the the handicapped.  He will not forsake all others to save his car, his etchings collection and his current girlfriend.  Call me old fashioned, but that's what I expect out of people, men in particular.

Here's what the US government is doing.

Four years after Hurricane Katrina exposed major deficiencies in the capacity of governments to evacuate and care for the disabled during a natural disaster, America's most vulnerable citizens are barely considered in most emergency plans, according to a report being issued Wednesday by the National Council on Disability.

The report says huge gaps exist in those emergency plans despite an executive order issued by President Bush in 2004 urging federal and local governments, as well as private organizations, to consider the unique needs of the disabled when planning rescues and preparing to provide emergency shelter.

They're planning on leaving Grandma to the flood, is what they're doing.  In the parlance of the true socialist, they are planning on saving the productive members of society and leaving the useless eaters behind.

Try as I might, I can't get behind that.  But what do I know, I'm just a racist/bigot/homophobe neocon.

Posted by The Phantom at 1:28 PM No comments:

"Renewable strains grid" Another MSM outlet rolls over in its sleep.

This little fact has been out there fore years and years on the web, but you never see it in the main scream media.  Oops, somebody at Bloomberg didn't get the memo.

President Barack Obama's push for wind and solar energy to wean the U.S. from foreign oil carries a hidden cost: overburdening the nation's electrical grid and increasing the threat of blackouts.

The funding Obama devoted to get high-voltage lines ready for handling the additional load of alternative supplies is less than 5 percent of the $130 billion that power users, producers and the U.S. Energy Department say is needed.

Without more investment, cities can't tap much of the renewable energy from remote areas, said Jon Wellinghoff, chairman of the Federal Energy Regulatory Commission. He serves as the administration's top official on grid issues and recognizes the dilemma it faces.

"As we add more and more wind power, the grid will get more stressed, and there's going to be a point where the grid can't handle any more," Wellinghoff said at an energy conference in Chicago. "The first thing we need is to build out transmission."

Well, duh.  You stick a 4 megawatt windmill out at the end of a rural power line rated for maybe half of that, every time a stiff breeze comes up the line is going to melt.

I notice there's a lot of windmills going up.  I notice no new power lines.  None.

One more thing I notice, the existing grid is so creaky it came down all by itself in 2003 and blacked out the whole north east USA and Canada.

I add those three things together, observe the rhetoric of the DemocRats of the USA and the Liberal/NDPee/Blockhead triumvirate in Canada, and I say Hmmmmmn.

One of two things will happen.  Either there will be a bunch of abandoned windmills sitting still with the paint peeling off ten years from now, or we will be seeing a lot of electrical "service interruptions".

Diesel generators, get 'em before the big price hike.