This is something that has been a long time coming. I've been saying for a million yerars that when you look at a crime map, you find that ALL the crime is done in a very small area.

Guess where those places are. Go on, take a stab at it. 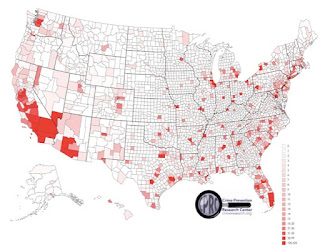 If you go to the link, the author lays it out very well. The concentration is not by population. Within the worst counties, when you break out the maps the concentration gets down to certain blocks. This street, people get wasted daily. One street over, nobody ever gets killed.

Again, wild guess what economic activity is going on in the busy neighborhoods.

None of this is rocket science, right? You count up the murders in New York City, you put a pin in the map for each one. You find that there's a forest of red pins in a ten-block circle, with none for miles outside it. It's the same in every high-crime city/county what have you in the USA. One tiny part of town is a free-fire zone, there's nothing going on anywhere else.

What I find endlessly fascinating is the determination by one political group in the USA to blame -guns- (or racism, or over population, or poverty, or television, or video games...)for what is obviously a government policy. You can't have that much crime going on in one spot without police letting it be that way.

They know where the crime is and they know who is doing it. And they LET THEM. That's the interesting thing here.

I've read claims that in Chicago there are negotiated agreements between gangs and politicians that exchange votes for non-prosecution of crime. I hope it isn't true, but I'm worried it is - that some politicians put re-election ahead of everything else.