Yesterday was "Everybody Draw Mohamed Day." Did you notice?

Yesterday was the fifth anniversary of Everybody Draw Mohamed Day. 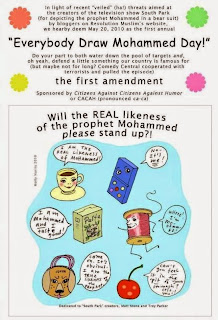 Molly Norris, the artist who originated Everybody Draw Mohamed Day, remains in hiding due to the threats on her life by Islamic dickheads. Kathy Shaidle reports that Mark Steyn is not amused.


Five years ago, a cartoonist with The Seattle Weekly, shocked by the way Comedy Central had censored "South Park" after the usual threats from violent Muslims, proclaimed May 20th as "Everybody Draw Mohammed" Day. What was novel about this particular promotion was that the cartoonist, Molly Norris, was not a "right-wing" "Islamophobe" but a liberal progressive, and therefore a rare if not all but unique example of a feminist leftie recognizing that the Islamic enforcers were a threat to her way of life. This was a very welcome development.
Unfortunately, Miss Norris was not so much recognizing reality as blissfully unaware of it. When the backlash against her idea began, she disassociated herself from it and signed off with - Lord help us - a peace symbol.

Five years ago might as well be the Jurassic in interwebz time. What happened yesterday?

Well, nothing. That's the issue. Something was supposed to happen, but Mark Steyn reports it got cancelled.

So I was heartened to see in my own country this event scheduled for today in Ottawa:


Come and join us in drawing Muhammed, the Pope's Mother, Buddha with headphones and or any other religious/political figure!
Let's exercise our freedom to blaspheme — while we still can!!!
We will meet by the East entrance of The Hill Where the October 22nd shooter entered The Hill) at 1 pm and walk to the North-East corner of the lawn, so we are very close to the route the shooter took. There, I will set up the table (and tent, if it rains) and we can get down to some blasphemous art!
Please, spread the word as far and wide as you can.
Alexandra

Can you guess what happened next, boys and girls?


After having been given (last week) the go ahead with the Draw Muhammed Day on Parliament Hill for tomorrow, 20th of May, by the RCMP security people, I have just received a phone call (at 5:25 pm) from Canadian Heritage cancelling the event due to 'security concerns'.

And to reprise Laura Rosen Cohen's line "security concerns" are the new shut-up. As a commenter at Vlad Tepes' blog writes:


This is exactly the modus operandi employed by France's government – to kill off any initiative by our friends at Riposte Laique – they give the permission for a demonstration, assembly etc. and then, when everything is organised, like 5 minutes before the event is supposed to start, they cancel it for "security reasons".

So don't worry, you still have freedom of speech - until five minutes before you're scheduled to exercise it.

Of course this is all by design. Anybody who draws Mohamed is a RAAAAACIST!!!! Just ask any media outlet.

Now, any Mooselimbs reading this should be cautioned. This is not about you. The Canadian/US Media has not chosen Mooselimbs to be their Special Friends. They have not selected Islam to be their pet religion. To the contrary, they are -using- Mooselimbs and Islam as a tool to bash their true enemies over the head with. The instant that Mooselimbs are no longer useful tools, y'all will be under the bus so quick your heads will spin.

Here's a reminder of what being tossed under the bus by Leftists looks like. Just remember what you're screwing with, all I'm sayin'. 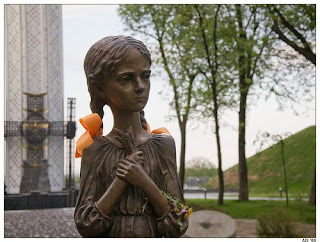