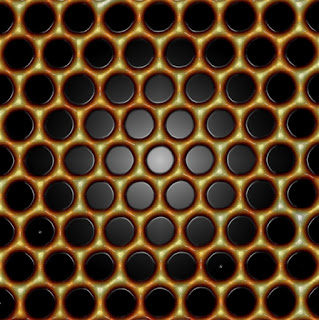 In short, if you can manually move electrons around, you can create different or entirely new materials. That's exactly what Stanford University has done: Using a scanning tunneling microscope (the blue point in the image above), the team of researchers placed individual carbon monoxide molecules on a clean sheet of copper to create "molecular graphene" — an entirely new substance (pictured right) that definitely isn't graphene, but with electrons that act a lot like graphene. The team, which was led by Hari Manoharan, then proceeded to move these individual atoms around, changing the structure and electron arrangement of the material.

It turns out that if you do that, you can make the electrons do things they aren't supposed to do. Which is twice as cool.

"One of the wildest things we did was to make the electrons think they are in a huge magnetic field when, in fact, no real field had been applied," Manoharan said. The team simulated where the atoms would be if there was a magnetic field, and then proceeded to move the individual atoms into these positions. Weirdly enough, the molecular graphene then behaved as if it was in a magnetic field. In other words, the presence of a magnetic field is neither here nor there: What really matters is the position of atoms and their effect on the arrangement of electrons.

So in principle anyway its possible to make a material that behaves as if it was in a magnetic field when its not.
What that would look like in bulk amounts is materials that have properties that will be like magic. Room-temperature superconductors anyone? Surface-to-orbit beanstalk/space elevator anyone? Cloak of Invisibility? Bullet-proof t-shirts?

This could be fun!