Whiteness, the new Lefty cause.

We've been seeing this word bandied about rather freely of late: Whiteness.

If you go to PubMed, the big online repository of Science (capital S for super important Real Science) papers, this is one of the "scientific papers" you're going to find:

Published in the Journal of the American Psychoanalytic Association (JAPA) on May 27th. That's a real journal, by the way, not one of those pretend ones run by some grad student in his mom's basement.

Whiteness is a condition one first acquires and then one has—a malignant, parasitic-like condition to which "white" people have a particular susceptibility. The condition is foundational, generating characteristic ways of being in one's body, in one's mind, and in one's world. Parasitic Whiteness renders its hosts' appetites voracious, insatiable, and perverse. These deformed appetites particularly target nonwhite peoples. Once established, these appetites are nearly impossible to eliminate. Effective treatment consists of a combination of psychic and social-historical interventions. Such interventions can reasonably aim only to reshape Whiteness's infiltrated appetites—to reduce their intensity, redistribute their aims, and occasionally turn those aims toward the work of reparation. When remembered and represented, the ravages wreaked by the chronic condition can function either as warning ("never again") or as temptation ("great again"). Memorialization alone, therefore, is no guarantee against regression. There is not yet a permanent cure. 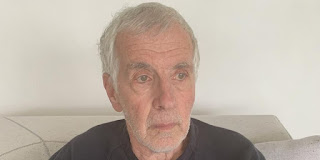 Here's a picture of him. Looks happy, right? I notice that he suffers rather severely from Whiteness.

Here's another one, in case anybody thinks the first one was a random alcoholic I plucked from teh interwebz.

Just in case you were wondering who's thirsting for your blood, now you know.
And now, from the bloodthirst to complete lack of self awareness: Yoga is too white, it should be Blacker. I'm not going to include the picture from the article, it is really unflattering to the poor woman. She's very large, and quite black. That's all you need to know.

Jessamyn Stanley needs you to know what yoga is really about - and it's not the poses.

In her new book Yoke: My Yoga of Self-Acceptance, the yoga instructor and body activist shares reflective personal essays that touch upon everything from racism to the cultural appropriation of American yoga, from consumerism to cannabis.

Yeah, but no. The book is actually about White Supremacy.


The book explores the existence of white supremacy and cultural appropriation in American yoga. "I would venture to say that everything in our collective society is rooted in white supremacy. I am sure there are many people who would disagree with that, and honestly I don't care because I believe that and I know it's the case," she says.

"I think that we see it show up in a lot of different ways. In the same way it's everywhere else and it has polluted everything else, it's polluted yoga. It's very much a part of how yoga has spread in America. The popularity of yoga really came down to wealthy white people wanting to learn and explore in a very specific way, and that's why yoga has been so white for so long in America."

The lack of self-awareness of an American black woman talking about "cultural appropriation" in regard to Yoga is really quite something.

Yoga is an Indian, specifically Hindu tradition that goes back well over 1500 years. A spiritual and religious tradition, the aim of which is to extinguish one's karma and get off the Wheel of Reincarnation. Nirvana is the aim. It has nothing to do with race, or Whiteness, or "body positivity" or any of the other things she's talking about in her book.

The book, so far as one can tell from her statements in the article, is pretty much a tirade against skinny rich white women, and has nothing to do with Yoga at all.

This recalls another recent article about Yoga being too White. A government program was the obvious answer.

Or this one, No Whites Yoga classes at UofT.

Or this one, where White girls are not allowed to teach Yoga because they're too white.

This has been your Whiteness update for today. Tune in tomorrow (and for the foreseeable future) for more Whiteness.
Posted by The Phantom at 3:11 PM

Fixed It For Them:

"Wokeness is a condition one first acquires and then one has -- a malignant, parasitic condition to which “woke” people have a particular susceptibility."

Playing word-substitution with these is a great game. All you need to do is substitute "White" with any other group, and get an instant Twitter suspension.

Amazingly, I didn't - though I did only change to "woke" instead of any more 'real' group. Far as i am concerned, 'woke' is idiot self-selection. Maybe Twitter ain't caught up/on yet.

I've seen a defense against the word-substitution game. Apparently it doesn't apply because "SHUT UP WHITEY!!!!"

Her claiming that Yoga is too white and needs more Black reminds me of the cluelessness of the Spanish teacher who recently decided to stop teaching Spanish because she wasn't Hispanic...

That's what I'm saying. According to Wokeness(TM) you shouldn't be teaching Yoga unless you're a Hindu from India. The spectacle of an American complaining about cultural appropriation in Yoga is hilarious.