This picture is dedicated to Kathy, who'd have punched the hippie bitch herself had she been there. 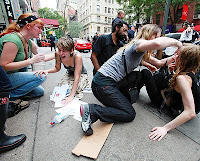 Police said 80 protesters were arrested or ticketed at multiple locations for disorderly conduct, blocking traffic and failure to obey a lawful order but the number could rise.

Officials said protesters did not have a permit for the march and one demonstrator was charged with assaulting a police officer, causing a shoulder injury. The NYPD was investigating the use of pepper spray.

That's the total content of the article that deals with what actually happened. The rest of it is a tale of woe, poor little innocent protesters unjustly attacked by the Blue Meanies.

Hippie punching is never a bad idea, you ask me. Frigging little weenies want to play flash mob, push people around and screw up traffic, they should feel some pain.

A fine won't make much of an impression, but pepper spray in the eye is a memory that will last a lifetime. The stupid chick in the picture above won't be quite so quick to lip off to the cops next time, no doubt about it.

Update: Welcome Five Feet of Fury fans. Kathy Shaidle should have her own program on Sun TV. Or at least Ezra should shut up and let her talk when she's a guest. ~:D
Posted by The Phantom at 9:06 AM

I can't help but think of the episode of South Park: "Die, Hippie, Die".

Cartman: "They're not people, they're hippies!"

You said it, Cartman.