The CBC is braying propaganda about guns again. They never ever stop, do they? Ooooh, the dreaded Kalashnikov! I bet that could kill ya just from looking at it. 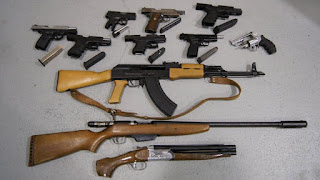 Crimes involving guns cost Canadians more than $3 billion a year, suggests an internal Justice Department study that may stoke the gun-control debate.
The newly released report examined all firearm-related crime in 2008, and calculated costs across a broad range, including the value of policing and prosecuting offenders, lost income and even burial fees for victims.
The total came to $3.1 billion, or about $93 for every person in the country, says the study, completed last year by two federal researchers.


What makes this propaganda and a -lie- is two things. First, this is an estimate.

The largest part of the total, about $2.5 billion, arose from so-called "intangible" victim costs, such as amounts assigned to pain, suffering and loss of life.

Just to be clear, most of this number is conjured out of thin air by assigning a dollar value to things that don't actually involve money. Shall we say considerable room for interpretation?

Second, and of far more import, is that this is only half the story. Even granting their cost number for argument's sake, what benefits do guns bring to Canadians every year?

Update, welcome  Five Feet of Fury readers! Kathy has some of the finest flying monkeys in the entire blogosphere. ~:D
Posted by The Phantom at 9:49 PM

3 billion? Big deal. Just being a resident of Ontario under Dalton Mc Squinty and his scamming henchmen costs far more.

Let's assume for one second the numbers are within an order of magnitude of correct. Outlawing all guns in the world changes the numbers not a whit.

Bearspaw, I agree. MgGuinty wasted $2 billion on computerized medical records alone, never mind what he's blowing on windmills and solar. Sad day when your own government is a greater threat than guns, eh?

Daryl, you bring up an interesting point worth expanding upon. I would argue that outlawing guns -will- have a large effect. Very large. Just not the one Windy Wendy says will happen.

I think this is worth a post of its own. Look for that coming presently.