When they're a toddler locked up in a Sudanese jail, is when.


"I don't have any more details to share," Psaki said.


The State Department also would not say if the boy's father, Daniel Wani, is a U.S. citizen and if, as the father has reportedly said, the U.S. Embassy in Khartoum asked the father to secure DNA evidence to prove his imprisoned 20-month-old son was in fact his son.
Meriam Ibrahim—the toddler's mother and fellow prisoner--was sentenced to be executed last week by a Sudanese court. Her capital offense was refusing to renounce her Christian faith.


Daniel Wani, Meriam Ibrahim's husband, is reportedly a naturalized U.S. citizen who has been seeking help from the U.S. State Department for himself, his son, his wife, and the unborn child, who Meriam Ibrahim is now carrying in the eighth month of pregnancy.


Meriam, 27, was born in Sudan to a Muslim father and Ethiopian Orthodox mother, according to Morning Star News, a Christian news site. Her father reportedly left the family when she was six and her mother raised her as a Christian. She and Daniel Wani married in the Christian faith in 2012 and had their first child, Martin Wani.

This is supposed to be a picture of the happy couple, pre-jail. 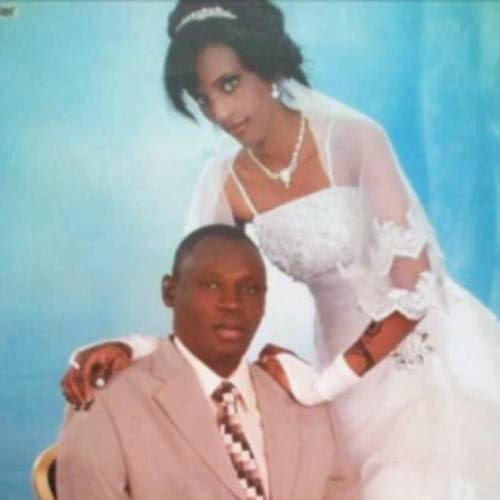 Funny that the US State Department can't tell CNS News if this man and his kid are American citizens or not. I don't mean funny in the amusing way, I mean it more in the "WTF do you mean you don't know? Do we look stupid to you?" kind of way. If the NSA tracks every fricking phone call in the Sudan, and they do, then the State department knows if an America citizen is in their jail house.

Is it in America's interest to let the freaks running Sudan lock up American citizens at whim and execute them? You would think NO would be the obvious answer, but somebody at the State Department may have another opinion.

Oh my, this could well mean that the decision has been made to do nothing to get them out of jail. Horrible and cowardly and tragic.