The Batman shooter showed up armed to the teeth with a plan, gas grenades and body armor. The Sikh temple shooter was a typical "suicide-by-cop" wanker but at least knew to go after old men and women.

But Mr. Floyd Lee Corkins II, loving liberal, LGBT volunteer and all-round DemocRat party useful idiot, what does he do? He walks in with a 9mm Sig and a bag from Chick-fil-A, then launches into a monolog! He stands there and runs his mouth, then after the security guards have gotten right up to him he suddenly realizes they aren't going to run away like little girls. So he starts shooting. I bet his ex-military old man Floyd Lee Corkins I is proud today, eh?

To my (admittedly non-expert) eye, this is not a mentally ill person. This is a person who's been fulminating about this eeeevile FRC for a long while, the major fail of LGBT Chick-fil-A Kiss In Day torqued him off harshly, and he just can't take it anymore. He has to do something to show the Bad People that there's at least one proud gay out there who's going to stop their evil once and for all.

Why would this genius be convinced the FRC is a wretched hive of scum and villainy? 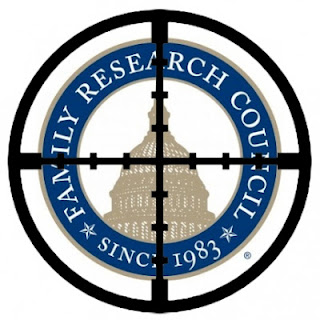 Southern Poverty Law Center and the Human Rights Campaign give us a clue. Or you could just go to pretty much any Lefty blog or news aggregator and be stunned by the violent rhetoric getting tossed about. Liberals have finally decided all Conservatives need to die, and now they're nerving themselves up for it.

Floydie wasn't really -serious- about killing these FRC people. He's making a meta-ironic statement with the the bag of chicken, he's making the pop-culture "I'm mad as hell and I'm not going to take it any more!" statement with the gun, and he's trying to claim the moral high ground by not actually killing anyone. All at the same time. He even said "its not personal, its policy" when he shot the guard guy. Who then KICKED HIS ASS, which was -awesome- by the way, and of course makes yet another recursively meta statement about gays being the victims of The Man.

In other words, Little Floyd baby is a typical hipster. A college English major, gay-activist pussy for whom symbolism is more important than reality. This shooting was not the act of an insane person, it was a calculated political statement being made by a mainstream fag with daddy issues who's just following the narrative.

Note to other hipster gay activist types: You people suck at this violence stuff. You should probably try to hate Conservatives a little more quietly, or there's a chance you might piss us off.

Kathy Shaidle has a superpower, she can read minds!
So can Kate McMillan!
Robins111 in the comments: "... shall be hereafter known as the Tellatubby shooter. " Now -that- is meta. Choke on that, hipsters.

Mark Steyn sends a shout-out!!! I'm still geekin' out about it!

I wouldn't be so sure that the idiot was making a meta-ironic statement. Perhaps a different thought is in order.

Why would a known sympathizer of the LGBT community have a bag of the EEVILL Chick-Fil-A in his backpack? Perhaps he was thinking that if he died in the attempt, then it would be blamed on Conservatives. The MSM narrative would go off on a tangential narrative to blame Conservatives and the real politics and narrative would be lost in the noise. Not sure he thought it out too well, but it would seem to me like he was trying to help his cause and his brethren to frame the narrative.

I expect the likes of Chris Mathews to be on this right sharply to condemn the actions of this lefty loser. Who shall be hereafter known as the Tellatubby shooter.

robins111, that's -extremely- meta. The guy had the bag and everything! Tinky Winky on a mission of DEATH!

Chris Mathews is on his fifth martini right now and was unavailable for comment.