Where have I seen that?

I was surfing the Lefty Bilge-o-sphere and discovered this astounding post by Rachel Marsden.

Anyone who can't withstand a rational debate on the subject of gun control -- particularly in light of last week's Sandy Hook Elementary School massacre in Connecticut -- should be automatically prohibited from ever owning a firearm. In fact, this should be the number-one requirement of gun ownership: Can someone applying for ownership of a deadly weapon withstand an hour-long debate against someone in favor of gun control without resorting to physical or verbal assault?

Is it too much to ask that every person wanting to possess a firearm be subject to a battery of tests -- everything from intelligence and emotional quotient exams to a psychological evaluation and background check? When America's Founding Fathers drew up the Second Amendment, they didn't do so with the mentally stunted, emotionally disturbed and deeply insecure in mind.


There's a characterization of gun owners for you, "mentally stunted, emotionally disturbed and deeply insecure", wow. That sounds familiar though, doesn't it? Where have I heard that before?

Then I found this cartoon. It seems familiar, again. I'm sure I've seen something like that. 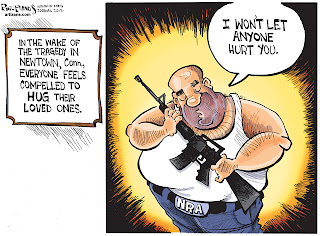 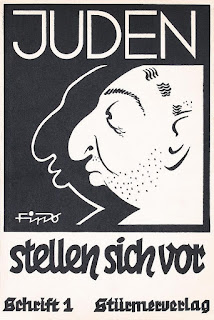 That worked out so well last time too.


Its funny, there's no resemblance between these two but their thinking is nearly identical.
Posted by The Phantom at 11:52 AM

I and a million others could debate her on the subject, although her 4 hour debate scenario is a ridiculous red herring because 10 minutes is all that’s need to lock down common sense.

Of course they’re not interested in common sense or facts, only in their own gut feelings and that they are right and we are wrong regardless of the harm and consequences.

Thank god we don’t have to worry about her gut feelings, at least for now.

Gun owners, freedom lovers and true patriots need to flip this insanity around and start putting these people on the defensive. We need to start forcing them to debate their positions with facts instead of slogans and we need to start threatening their positions and possessions that they take for granted in their lives.

It’s our countries not theirs, if they want change they can move to places like Mexico or China to accommodate their totalitarian visions. We on the other hand have nowhere to run.

Hey Knight, thanks for stopping by.

I guess its not coincidental that Marsden lives in Surrender Monkey territory these days, eh?

Speaking of "psychological evaluation and background check", isn't Rachel Marsden a serial stalker? They even made a movie supposedly based on her stalking exploits.

Another "conservative" who isn't. A pox on her.

Hi Mamba. I was doubting her mental state when she described being "mugged".

You think so Brian? Not what I got from it for sure, but lets roll with it for the sake of argument.

Pray tell, how might such a thing be accomplished?
How does one measure "mentally stunted, emotionally disturbed and deeply insecure"?

Who gets to do the measuring? Rachel Marsden?